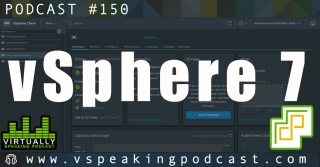 This month VMware announced vSphere 7 touting it as the biggest innovation since the launch of ESXi. This is a prettty signifigant release. So far the virtually speaking podcast covered part of the release in two previous episodes (vSphere with Kubernetes and vSphere Lifecycle Manager in the vSAN 7 episode) This week we weclome Niels The post vSpeaking Podcast Ep 150: What’s New in vSphere 7 appeared first on Virtual Blocks.