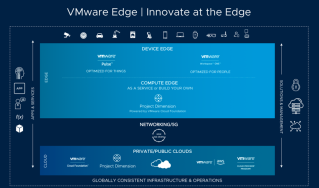 The following is a guest post from Kit Colbert, CTO – Cloud Platform Business Unit at VMware. Previously, Kit served as VP and CTO of the Cloud-Native Apps Business Unit at VMware. Kit helps drive the VMware vision across vSphere, VMware Cloud on AWS, and Cloud-Native Apps. He also moved back to a CTO role, focusing on The post Introducing Project Dimension appeared first on VMware vSphere Blog .